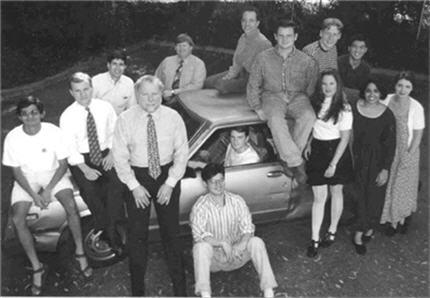 When you talk about Yahoo, most people know the names Jerry Yang and David Filo. But if you talk to people who were there at the time, there is another name that everyone mentions: Tim Brady. Tim was Yahoo’s employee number 3. He wrote the original Yahoo business plan. He became Yahoo’s head of product, and as much as anyone, he played a major role in building the company that Yahoo became in the 1990s. Tim was also a college buddy of Jerry Yang’s, so he offers us excellent background on Yahoo’s founding and the thinking that went in to the company’s development.

There aren’t many pictures of Tim Brady on the web. In the photo above, he’s second from the left, sitting on the car hood with the white shirt and tie.

The time early on when Yahoo thought it might be dead:

Early on, Yahoo got a ton of traffic because it was the default “directory” button on Netscape Navigator, when Navigator was the most popular browser in the world. Eventually, Netscape woke up to the value of this “free” traffic and decided to auction off placement on the button. Rival search site Excite.com won the right to replace Yahoo on the button by bidding $5 million. The question was, would Yahoo’s traffic numbers crater without that prime placement?

“Our business model didn’t allow us to bid what Excite did. The day we came off the button we just sat there looking at the logs going, ‘Ok, do we have a business or not?’ Were we so reliant on Netscape that our traffic was going to die. And it didn’t. In fact, it stayed flat for a few days and then continued to go up. That, in my mind, was the day we knew we had a real business.”

The day they gambled the company on advertising:

The early web had a culture that was very hostile to commerce in general, and advertising in particular. But Yahoo felt that advertising was the only business model that would allow it to operate while still providing a free-to-consumer service. Yahoo was one of the first big sites to make a calculated gamble that users would tolerate ads so long as they didn’t get in the way of the service.

“August 1, 1995, was the first day we put advertising up. Until then, we essentially had no graphics on the site. I remember putting up the site [with advertising] and Donald Lobo essentially hitting the return button that put it up, and him just putting his head down on the desk and saying, ‘We just fucking sold out.’ The email box was immediately  flooded with people badmouthing us and telling us to take it off. ‘What are you doing? You’re ruining the net.’ (…) It was hard to know if we were doing the right thing at the time. Not that we had, as a business, a whole lot of other options at our disposal.”

Yahoo had always had plenty of search competitors, but they knew Google was an entirely different beast:

“We knew right away we could be in trouble. This was about that time where there was this inflection point in the web… where you expected things to be online. Before, you would be happy if you were looking for something and there was a website about it. And now, at this point, when Google shows up, if you search for 13th century Italian poets, you expected a list of things. (…) When Larry and Sergey showed up and wanted to show us what they did, we knew. We knew it was different. We thought they [the competing search engines] would always be incremental leapfrogs. And this was clear to us that it was different.”

Could Yahoo have done anything to prevent Google from usurping the search crown?

“I ask myself this question every once in a while. I think, in the context of what we did, almost all of the decisions we made were rational. Page Link was something novel. We didn’t think Google could do what they did. And by the time we knew it was going on, it was too late for us to react to it and respond to it in a competitive way. We were also a public company with billions of dollars in revenue, and so, switching course if you will, was pretty hard for us to do. And the other thing was–that isn’t often noted–at the time, Wall Street analysts were pushing on us hard to diversify our offering. So, the idea of doubling down in an area that we were perceived as already kind of dominating–search–would have been not very well received in the investment community. There was some pressure almost not to do it. Looking back on it, I don’t remember a meeting where I can look back and say, ‘Yeah, that’s where we made the mistake.'”

Yahoo’s Acquisition of Overture (Crossover Ep. With the Acquired Podcast) 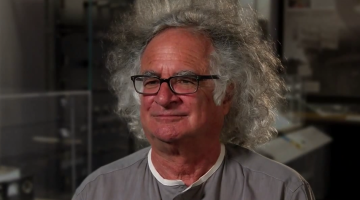 The Development of Consumer Broadband with Intel’s Avram Miller